A Shorthand Method to Simplify Bidding 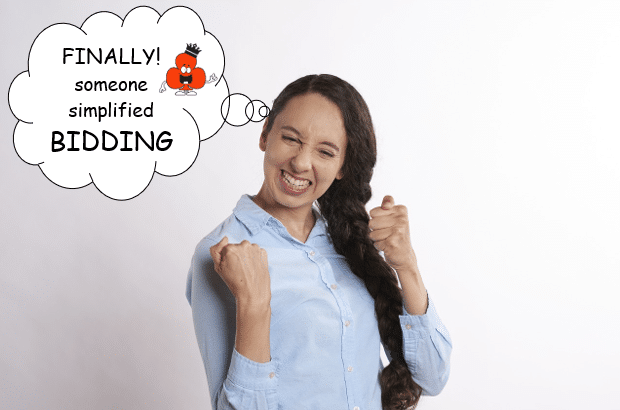 I have a friend who wanted to learn everything he could about bidding in bridge. He was an avid and resourceful student. Standard American was his system of choice. He spent hours and hours trying to master it. He read every book, every article and every column that featured Standard bidding. He contemplated every expert’s pet theories and conjugated every nuance of spoken code between partnerships.

Then one day he gave it all up for fly fishing.
“What gives?” I asked. “I mean fly fishing, really?”
“Sure.” He responded.
Then he went on to explain.

“You learn everything you can about bidding. But then you find that sometimes what you say means something other than what you meant. You can show a fit with three card support, but sometimes you guarantee four. And once in a while you need five. What’s forcing and what isn’t? And what the blazes is temporizing? Then there’s passed hand bidding, competitive, aggressive, pre-emptive, defensive, conservative, and constructive bidding, On and on and on ad-infinitum. Honestly, I can no longer afford it.”

“Huh? Afford it? Afford what?”
“I’m now paying my psychiatrist triple what I used to pay.”
My head was spinning, so I retreated back to square one.
“But fly fishing? C’mon.”
“Sure,” he said. “The only thing you have to know is how to stick a fly on a hook.”
I didn’t have the heart to tell him that fly fishing had nothing to do with flies.
He walked away backwards, singing a show tune and tipping his hat to a pigeon.

That’s when I decided to come up with a bridge shorthand. It wouldn’t cover everything, but it would simplify the game for people who just wanted to enjoy playing bridge without needing a PhD in code-speak. It might even save the government some money. Maybe they could stop supporting and treating head cases in the bridge world.

Anyway, badda boom, badda boom. I kept the guidelines for opening bids and opener’s rebids pretty much the same as what you have been playing. You’ll only be in trouble if you can’t remember what you’re playing.

It’s the responder who always seems to be enmeshed in a morass of ambiguity, and that’s the beauty of El Sabio’s shorthand. It brings the responder out of the muck to the safety of dry land. It helps the responder to bid appropriately. The following guidelines apply in both competitive and non-competitive auctions, and they stay the same whether you’re bidding as a passed hand or not. Use this structural format whenever you’re supporting partner’s suit, repeating your own suit, or bidding notrump.

Situational, inferred, or conditional circumstances never hamper or alter your bidding. The numbers never change. Substantially much less to remember. No strain on the brain. Here we go:

Partner opens one in a major suit:

Partner opens one in a minor suit:

Responder repeats his or her original suit after partner opens and rebids:

Partner opens in either a minor or major and responder bids notrump:

In other words, Responder follows the same point count framework as given above and in every circumstance.

Responder passes and then enters the auction after partner opens or overcalls:

If you decide to use this shorthand, you can still use any conventions that you and partner have agreed on and also your partnership understanding of what’s forcing and what isn’t.

See, easy peasy schmeezy. Now we have to name this systematic shorthand. How about “Standard Steinberg”?